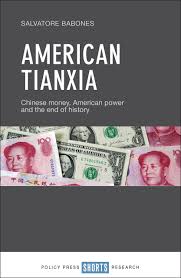 When 28 years ago Francis Fukuyama published his famous “The End of History?” essay, world looked differently. It was just about to enter the “unipolar moment” when US dominance was unquestioned. Later, however, much changed and “history returned.” Washington weakened, China emerged, and the global scene became much more unstable, with Beijing being seen worldwide as the main challenger to Western dominance and a possible future hegemon. Hence Fukuyama’s prophecy has been seen as a clearly failed one: unfulfilled wishful thinking at best. Now, Salvatore Babones, a Sydney University professor, defends Fukuyama’s concept in his new book American Tianxia. American Power, Chinese Money and the End of History. He goes against the current global intellectual mainstream by saying that not only the US global dominance is here to stay but it will last long, very long: “The next system transition is likely to be several centuries away.”

China is globally on par with such middle income countries as Brazil or Mexico.

This kind of opinion could have been shrugged off for being intellectually conservative (if not outright reactionary) have American Tianxia not been well-argued and well-written at the same time (the latter is important as the book successfully follows the best Anglo-Saxon tradition of readability and good writing style of the academic papers). Babones, a Wallersteinian economist, claims that China is globally on par with such middle income countries as Brazil or Mexico. According to him, China is important, no doubt, but ultimately is (and will be) unable to challenge US dominance out of simple economic realities and the structure of international trade.

Babones’ views are well-grounded in statistics and data without being repellent for non-economist readers at the same time. What is even more important, they are well-grounded in economic history too. Babones is best when he offers a longue durée view on Chinese economy (e.g. when we hints at the possibility of Ming overthrow in 17th century China due to the end of “trading bonanza” and a possible repetition of this scheme now), or when he presents unorthodox comparisons (Zhang He flotilla as China’s “gunboat diplomacy”). It is a real ability to switch back and forth from 15th and 16th centuries to contemporary times to show comparisons – and he does it skillfully and convincingly.

Babones is best when he offers a longue durée view on Chinese economy.

This is best seen in the headline Tianxia concept. Babones uses this ancient Chinese term (meaning literally “all under the heaven” and politically the China-dominated international system in East Asia until 1841) to describe the current US-dominated global world. His decision is nothing but intellectually brilliant. To borrow a term from your foes to tell them that you dominate is provocative, flamboyant, and perhaps even blatant. Certainly not to be ignored!

Babones is equally good when he criticizes “an entire intellectual industry of China specialists, authors, and consultants” based on the “rise of China.” He labels it (after William Callahan) as “a new form of orientalism” (“one that associates the mysterious East with hidden reserves of power”). Generally, Babones’ theses should become a good antidote for all those too much enthusiastic about possible positive implications of China’s rising power. The same can be said about the increasing number of fans of geopolitics, especially those who believe geopolitics have all the answers to political problems: a reading of Babones’ book (his mocking of famous Mackinders’ claims about Central Asia being the pivotal region of world politics or his skepticism about One Belt One Road Initiative) should bring them down to earth. Overall, Babones’ criticism is really intellectually refreshing.

Being a book not to be missed, American Tianxia is, however, not without flaws. There are minor ones, easy to point out, like on page 11 where Babones calls the seizure of Goa a “violent one” (this opinion is at best debatable as 50 soldiers killed in the invasion is hardly a violent result in the realities of subcontinents’ decolonization), or on page 68 where he writes that USSR had not “ held any appeal beyond sheer force” (and what about the pre-war communist fascination in Europe?). The major one is more difficult to operationalize but easy to spot: it is Babones’ pro-American bias. To put it in one sentence: I like Babones’ criticism of China, but I do not like his boasting about A merica’s power and centrality that borders on national arrogance.

Or when he presents unorthodox comparisons. It is a real ability to switch back and forth from 15th and 16th centuries to contemporary times to show comparisons.

Citations from the book will be essential here. According to Babones, USA by the virtue of being built on individualism created an ”universal, self-sustaining, and expansionary” system (American Tianxia) that “makes available to individuals opportunities that their own countries can’t or won’t provide”; hence: “the United States was founded on individualism, and as more and more people put their individual interests ahead of those of their countries of birth, they come into alignment with the American Tianxia […]. The result is an extraordinarily stable central state system in which individuals, especially elite individuals, insist on the maintenance of free access to the US-centered global system as the cornerstone of their own country’s national policies.”

Throughout Babones’ book this message is clear and simple: the history has ended and USA has won. All elites of world’s countries want either live in the USA (or in other Anglo-Saxon countries) or have their children live there. All countries in their best interest want to have good relations with the USA. Ultimately, we will all became the citizens of American Tianxia, all nations will sooner or later vanish by becoming remodeled on the American example. And this situation is to last at least several centuries ahead!

I am not sure if Babones is aware that for many, many people in the world this message sounds really bad. He ignores a thousand of social features (from cultural and lifestyle differences and national pride, via imperialistic US foreign policy, the inhospitality of the USA, its unlimited and often offensive-to-others freedom of speech, its universal and hence lethal access to weapons, its lack of proper general healthcare, its underdevelopment of public transportation, its primitive materialism, its dramatically low quality of aesthetic culture, and finally its horrible food – just to list the top of the iceberg of the major ones) that make (too) many people in the world not wanting to live in the USA. But most importantly, it ignores the very fact that USA is NOT being liked globally (which is, by the way, one of the reasons why China is so popular: not only leftist intellectuals hope that China will be a better alternative, this sentiment is much more widespread in Western Europe, Russia, and in the Global South). In many world rankings of the “most hated” country, USA leads or is near the top; even more respected polls, such as Reputation Institution’s annual reports, show a sharp decline of USA’s global popularity. For many, many people in the world it is USA that is today the evil empire. This almost universal global dislike makes USA no longer such an attractive option as it was, say, in the 19th and 20th centuries. Thus, this is the biggest drawback of Babones’ concept: no, not everybody would like to live in the USA, become American, or follow US lifestyle. Not at all.

That said, and putting Babones’ irritating overappraisal of the USA aside, I still have to say that American Tianxia is a must-read for everyone interested in the current global affairs. It is a thought-provoking antidote for China-enthusiasts and for geopolitical fans alike. Its defense of Fukuyama (with replacement of democracy by individualism) is brave and honest – after the reading, Babones comes out here as a very good, even if biased, intellectual. If he is right in what he says, he will go down as an intellectual that against the mainstream proved to be correct; if he is wrong, he will be forgotten as an epigone that documented the swan song of the passing era.

holds a PhD in political science from the Jagiellonian University in Krakow and is the author of “The Bear Overshadowed by Dragon. Russia-China 1991-2014”, the first book on contemporary Sino-Russian relations in Polish (soon to be published in English) as well as three books on Burma/Myanmar, including the only biography of Aung San Suu Kyi in Polish. He is also the author of Russia and China: A Political Marriage of Convenience – Stable and Successful (Budrich 2017).