Despite being often denounced and considered impractical, space research plays an important role in building our future.

Going to Mars is beyond human capability, at least when it comes to humans themselves. So far, our remotely controlled, sophisticated robots are discovering peculiarities of this red boulder flying through space on our behalf and this status quo will not change at least for the next ten years.

Since the 1970’s, when the in-situ research started with American landers Viking I and Viking II, we have been closely looking at Mars and unveiling mysteries of the Red Planet. It indeed is a challenge. Less than 10 of our probes successfully landed, yet they provided us with so much valuable information. We have learnt that Mars is like Earth’s little broth- er: it shares a similar history and of all planets in our Solar System, it is the closest to our one. It has a thin atmosphere which allows for some weather phenomena to occur: wind, clouds, and even dust storms. There are signs that it used to be covered with liquid water, creating oceans, rivers, and carving out valleys into the Martian soil. Water is still stored there, al- though as ice, along with frozen carbon dioxide.

So what is our motivation to go to Mars? All of the mentioned properties make it a perfect candidate for a planet that could host life. This breakthrough discovery would redefine thinking of humans as species. However, even without this discovery, Mars is an interesting place. Its distance from Earth, temperature range, large storage of water, carbon dioxide, and other chemical compounds make it so far the most feasible option for colonization and potential terraforming, hence making it the first stop on turning hu- mankind into multiplanetary species. It may sound too much like a science fiction but this effort is crucial for the survival of our kind and for learning more about our own Planet Earth. In science, analogies are a substantial tool to discover the missing pieces of a puzzle and studying Mars can provide us with information that can tell us about the history of Earth, its formation, and what may happen to it in future.

A Common Goal Can Unite People

In order to do that, our scientists and engineers are developing a cutting-edge technology. Despite their political disputes, countries cooperate, because this feat is too big to be completed by a single nation. It is a great example how a common goal can unite people regardless of their differences. In the past ten years, several missions based on international cooperation successfully reached Mars and there are more coming in the upcoming decade. In 2020, two missions, European ExoMars 2020 and its American counterpart Mars 2020 will launch towards Mars and in the following years, we can expect some of the most ambitious projects in human history taking place. Samples of Mars soil would not only be dug out using drills but eventually returned to Earth for a more thorough analysis. Due to the limitations of our technology, this is where we need to go beyond human activity: using landers, robotic rovers, and potentially drones are our only option to explore this planet.

But is it really the only option? Since so many countries have been involved in the research of Red Planet for so long, why did we not go to Mars already when people managed to get to the Moon? There are several reasons and none of them make this task easier.

The Problem of Distance, Gravity, and Radiation

First, a major problem is the distance. In an ideal constellation, the journey between both planets using the launch systems available now takes about

In the past ten years, several missions based on international cooperation successfully reached Mars and there are more coming in the upcoming decade.

eight months. Eight months! Even the signal, travelling at the speed of light, takes several minutes to reach Mars. That is a very long time throughout which the astronauts’ crew shall occupy themselves with work, and the group dynamics will develop. Moreover, there is still an issue with covering basic physiological needs on their space journey, such as nutrition, hydration, and breathing. Furthermore, since the trip takes so long, duration of the scientific mission on the surface shall take at least a year. Along with both journeys, we talk about a mission lasting as long as three years. For such an extended period of time, we do not quite yet have the technology available to create the right conditions for astronauts’ survival. 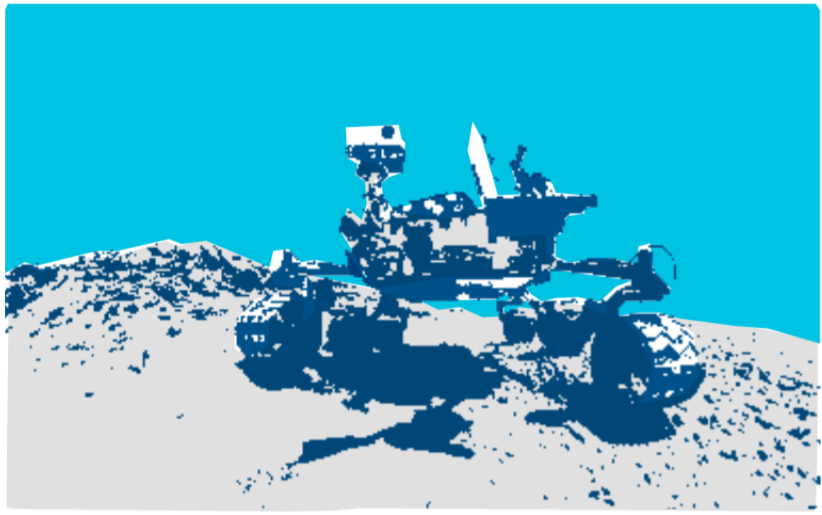 Second, the gravity. Here on Earth, we do not pay much attention to it as long as things are not falling out of our hands. It becomes a real issue when one tries to defy gravity and escape a gravitation field of a planet or a moon. While escaping the Moon is considered rather simple

Since so many countries have been involved in the research of Red Planet for so long, why did we not go to Mars already when people managed to get to the Moon?

due to lower gravity, Mars is a larger, more massive body, and this causes a problem. A higher gravitational acceleration is more difficult to conquer (just to put it in perspective, lunar gravitation acceleration is equal to 1/6 of Earth’s one, while on Mars it grows to of Earth’s gravitational acceleration, and that is quite a difference). In order to successfully leave Mars and return back on Earth, we would have to deliver a really powerful rocket to Mars. Experts say it would have to be as powerful as Saturn V, a rocket that brought people to the Moon. And getting such a colossus intact on Mars is really tricky. Most likely we will end up using reusable launch systems instead.

Third, when we are at those distances and launch systems, the way to Mars has another big setback, and that is the ubiquitous cosmic radiation. Missions to the Moon within the Apollo program have not been exactly long, which worked in favor of the astronauts on board. The longest one lasted for 12 days, which is still a duration that human body can withstand in space and receive reasonable amounts of cosmic radiation.

Taken to the extreme, if we sent astronauts to Mars tomorrow, not only would they not have a chance to get back, but they would probably go blind or simply die in space.

The Endeavor Is Taking a Concrete Shape

However, eight months of travelling through such an environment is a significantly longer period and our technology does not provide us with solutions which would efficiently protect astronauts in deep space. Taken to the extreme, if we sent astronauts to Mars tomorrow, not only would they not have a chance to get back, but they would probably go blind or simply die in space.

Despite what has been said regarding Mars properties and challenges which arise with our attempts to get humans to another planet, this greatest endeavor in human history is taking a concrete shape. Multiple parties are interested in going to Mars, including Elon Musk’s private venture SpaceX, which suggests the incredible potential this planet o ers. While his plans may seem unrealistic, it is because his marketing-driven approach does not allow him to make any long-term estimations. NASA and its partners suggest a different, more realistic scenario.

In 2028, the first humans will reach Mars orbit. There, in a self-sustainable orbital station, they would cooperate with robots and drones on the surface. The main issue nowadays is the long delay in communication caused simply by the great distance between both planets as this prevents us from controlling any technology on Mars in real time. That may change with the orbital station from where, using VR, we may control our robots and dramatically speed up the exploration. This newly obtained information may lay a foundation for a decision when and where it would be best to land. Depending on funding and technological advancement, the first people will set foot on the surface of Mars in 2033 or 2035. And that is, at least in space research, right around the corner.

A Redefinition of Our Thinking

This milestone in space exploration will redefine how we think of human society and may benefit us all. The last time our technological advancement rapidly evolved was thanks to our effort to reach the Moon and it has led to the miniaturization of computers, digital photography, and a vast amount of insulation materials used nowadays. Such breaking moment may be coming again with another challenge ahead of us. As it was outlined, there are many issues we need to solve before the first human will walk on Mars and safely return.

The last time our technological advancement rapidly evolved was thanks to our effort to reach the Moon and it has led to the miniaturization of computers, digital photography

The beauty of such situation is that our future inventions will not only help astronauts set foot on an unknown land but also help hundreds of millions of people here on Earth. To sustainably obtain drinkable water and efficiently produce food in such hostile environment will teach us valuable lessons and this technology can be reused in similar, just slightly less hostile places here on Earth.

And finally, the aspect of unity. Contemporary witnesses who watched the television on the memorable Monday 21st of July, 1969, reported that they felt a sense of unity with the whole humanity and this experience was shared by people regardless of nationality, ethnicity, gender, or age. In the upcoming years we will have a chance to go through the same, perhaps even more intense experience. Despite being often denounced and considered impractical, space research plays an important role in building our future, not only as a field that can provide us with much-needed technology but also as a tool that will pave our way outside of our own planet and help us build peaceful, cosmopolitan future. That is why we should care about going to Mars.

We invite the alumni of Aspen Young Leader Programe to present their projects, thoughts and inspiration in Aspen Review. Aspn.me/AYLP

Jan works in the Department of Space Physics at the Institute of Atmospheric Physics at the Czech Academy of Sciences, where he focuses on the European Space Agency’s ExoMars 2020 mission. He is currently working on the project that will lead to a landing on Mars in 2021. Thanks to his research, he was chosen by the Financial Times and Google as one of the New Europe 100 challengers in Central and Eastern Europe in 2017.