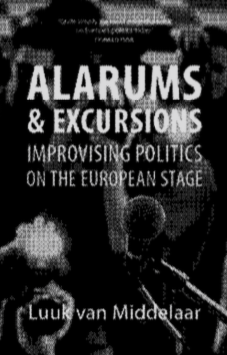 The historian and political theorist Luuk van Middelaar served as adviser and speechwriter to the Euro-pean Council chairman Herman Van Rompuy for five years. Over the course of those five years, as a result of financial crises and changing global power relations, Europe began to undergo a fundamental transformation.

In his book Alarums & Excursions. Improvising Politics on European Stage van Middelaar describes how, under the pressure of events, a technocratic European Union was forced to transform itself into a major geopolitical player even though it lacked the relevant institutions and rules and had to create them as it went along, during the euro crisis, the assault on Ukraine, the immigration crisis, and following the Brexit referendum and the election of Donald Trump in the USA. These are the basic events which van Middelaar believes have radically changed the rules which the EU adhered to through its previous decades.

The author begins by outlining the playing field and explaining why and in what way the EU lacks instruments for resolving unexpected crises and the fact that the EU’s rules, aimed primarily at market regulation, are not up to dealing with present-day power politics.

Van Middelaar’s book is not, of course, a defense of the European Union in its current form. Rather than juicy backstage gossip, the author presents readers with the conclusions he has drawn from them. The book demonstrates how poorly the EU is equipped at present and for the future and how difficult many proponents of a unified Europe find it to make the transition

The crisis in Ukraine, and later the refugee crisis, have shown that the EU still acts as a magnet, but it has also revealed its strategic helplessness and lack of readiness to take geopolitical action.

from the technocratic world of free-market rules to an unpredictable political sphere affected by events over which the EU’s rules rarely have much, if any, influence—or indeed, where these rules put limitations on finding solutions to problems, be it the euro crisis, the war in Ukraine or the influx of refugees. It is only logical that individual member states and their politicians play an increasingly greater role, which leads the author to state right at the outset, in his introduction, that we can hardly expect any Euro-federation in the near future. He then goes on to explain why this is the case.

A Method of Trial-and-error

The chapter on the Greek crisis and the rescue of the euro is a graphic example of the importance of words in European politics. It is obvious that dealing with the euro crisis was just one big improvisation, which goes to show that trial-and-error is a method that is sometimes used even in large-scale European politics. Van Middelaar sees a direct link between the euro crisis and the subsequent rise of populism in Western Europe, and the way in which British resistance to greater integration gradually gave rise to the idea of a referendum on Brexit.

The basic lesson of the euro crisis is that you cannot go on forever improvising short-term solutions one step at a time. On the other hand, the author appreciates the fact that a solution that reflects Europe’s values of both responsibility and solidarity was eventually found. This approach failed, however, in the refugee crisis that followed.

The crisis in Ukraine, and later the refugee crisis, have shown that the EU still acts as a magnet, but it has also revealed its strategic helplessness and lack of readiness to take geopolitical action. In both cases, the EU was faced, for the first time in history, with the question of where its external borders are and how to protect and defend them. In this process, the EU realized that while it can develop and maintain the soft power that makes it attractive by applying technocratic solutions (i.e. regulations), it is not capable of playing, or maybe does not wish to play, power games using brute force. While Russia has applied nineteenth-century rules to playing this game, Europe’s rules proved inapplicable to the aggression against Ukraine.

The transformation of a technocratic association into a political player necessitates a new way in which individual member state citizens should be viewed by the bureaucratic machinery in Brussels.

The author makes an interesting observation in this context: while the Americans know how to combine geopolitics with a struggle for freedom and play to win in this game, the European Union is not able to combine these two things and does not play to win but to minimize its losses. This was evident in the refugee crisis, in which the EU rules did not work, whereas interests did. This is something the EU only learned—at least for a while—when it reached an agreement with Turkey on detaining refugees.

The EU Should View its Inhabitants as Citizens

The Brexit referendum and the subsequent election of Donald Trump as US president was a fundamental shock to those who champion the EU, making them realize and admit for the first time that their project might be mortal. Notions such as sovereignty have made a comeback and the EU has, once again, been forced to defend its very existence and raison d’être. This has been escalating in line with the growing opposition within the EU and analysis of this development forms the final part of van Middelaar’s book. He emphasizes the fact that it met with no real opposition in the EU since this was impossible within the institutional, technocratic and political set-up of the European unification project until the emergence of populists who in view of this set-up present anti-system opposition to the EU’s very existence.

The transformation of a technocratic association into a political player necessitates a new way in which individual member state citizens should be viewed by the bureaucratic machinery in Brussels. To put it simply, the EU has to stop regarding its inhabitants as mere consumers who need protecting and instead view them as citizens whom it needs to talk and listen to.

They are the source of its political power and strength which the EU needs now and will need in the future if it wants to remain a political entity to be reckoned with in global politics or, at a minimum, if it wants to ensure safety and prosperity within its borders and strengthen cohesion within its ranks. Although this gives the EU many of the attributes of a nation-state, van Middelaar is convinced that it ought not to push it towards federalization and an “ever closer union”. Quite the contrary: the EU must learn how to function in this new situation as a strong community of nations.

A Less Technocratic Approach is Needed

This will not, however, be easy. It is not enough to be technocratic—the EU must learn to use common sense and improvise. It needs to overcome three current taboos: defending individual states, different views among its members and realizing that it has boundaries that need protecting.

The second half of the book analyzes how far the EU’s leadership bodies can change and how they work. It is interesting for a journalist to see the great importance the author ascribes to the media in exerting pressure to ensure that the EU’s executive and the European Council tackle issues instead of kicking them down the road, and the role the media play in making EU decision-making more democratic precisely in these crisis-driven years. EU bodies have been trying to regulate problems instead of taking action, something that is typical of a technocratic approach.

As we have seen, the book presents a profound and thorough critique of the EU aimed at making it work better, based on the past ten years’ experience. The conclusion it arrives at is crystal-clear: what is needed is not federalization but a less technocratic approach and more Realpolitik based on a consensus among nation-states, as well as on jointly defined interests that are closer to nation-states than supranational groupings. This might result in more security and a greater readiness to act in financial, military or security crises.

For anyone seriously interested in changing the EU so that it becomes stronger and more resilient in the world as we know it today, van Middelaar’s book Alarums & Excursions is a good starting point.

has been working for different Czech print and online media since 1992, from 2006 to 2018 as Chief International Editor and now Chief Analyst at Hospodářské noviny daily. He writes a regular bi-weekly column Middle Europe for the English language internet magazine Transitions Online, for this column he was awarded the „Writing for Central Europe“ prize in Austria in 2012. Co-editor of Visegrad Insight magazine.