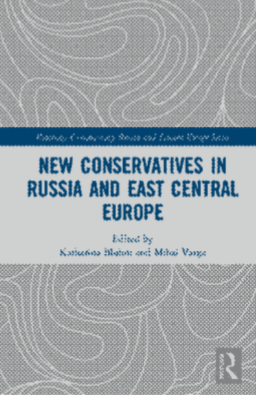 One of the most frequent conclusions coming up when describing political developments in Central and Eastern Europe is that countries east of the former Iron Curtain have been impacted by a “conservative wave”. This is followed by a series of hasty, half-baked assessments that mischaracterize or distort the new political reality on the ground.

A popular thesis is that Russia, Hungary and Poland have drifted away from Western liberal democracy solely due the influence of the most prominent political leaders that have cropped up there: Vladimir Putin, Viktor Orbán and Jarosław Kaczyński. What is often ignored is the deeper historical context and understanding of traditional societal structures, without which the painted picture is not complete.

Political scientists Katharina Bluhm and Mihai Varga have compiled a collection of essays that provide detailed and comprehensive insight into the political and social developments that have taken place in Hungary, Poland and Russia in recent years. They delve in twelve chapters into various aspects of “the conservative renaissance” in these three countries. What is more, they provide an explanation of why it has happened.

Their key argument is that there has always been some elementary “conservative infrastructure” present. After the fall of communism, it has been systematically cultivated until it was able to bear fruit intangible political influence and electoral success. These conservative networks were formed, for example, by philosophers and ideologues such as Alexander Dugin, a Russian theorist of “euro-asianism”, by businessmen acting as lobbyists, such as Konstantin Malofejev, an oligarch and owner of the TV station Csargrad, or by various think tanks or influential intellectual magazines.

In Poland, the key role for the electoral triumph of the PiS (Justice and Law) party was played by a Catholic radio station Radio Maryja, in Hungary there were so-called “Civic Groups”, which were established by people from Orbán’s national-conservative party Fidesz as a reaction to the election victory of socialists and liberals in 2002.

Disillusionment with the Transition Process

The authors see the rise of political conservatism in many countries of Central and Eastern Europe in connection with the disillusionment felt by many people during and after the transition from centrally planned societies to a pluralist environment. It is interesting that “the conservative wave” has avoided, at least for now, countries where economic liberalism has not taken many roots, compared with others, such as Romania, Bulgaria or the Baltic states, and which have undertaken deep austerity programs after the financial crisis in 2007 and 2008.

The region’s conservative wave can be explained, if somewhat simplistically, as a reaction to neoliberalism, which became the doctrine of the new political and economic elites after the fall of communism.

The region’s conservative wave can be explained, if somewhat simplistically, as a reaction to neoliberalism, which became the doctrine of the new political and economic elites after the fall of communism. Its creed was the decreased role of the state, deregulation and maximum possible privatization. This led to a weakening of state institutions—and conservatives prefer them to be strong. The way they see it, economic power and influence went into undeserving hands—for example, because they were connected to the previous communist regime and belonged among the privileged. The fact that many members of these new elites ended up being investigated and suspected of corruption only strengthened the conservatives’ prejudice against the entire liberal system.

The advent of neoliberalism in the post-communist environment was accompanied by the idea that unharnessed market forces would enable economic betterment and upward social mobility of the widest strata of society, allowing the democratic system and rule of law to take root organically. As pointed out by the authors, that was also the prevalent school of thought in the West at the time. It only made sense for the countries that had just got rid of real socialism to reach into the neoliberal toolbox.

Conservatives did not take aim solely at neoliberal transformers, but at the traditional Left as well, personified by the unions, levelling accusations of assisting “a sell-out of national treasures to foreign capital”.

Many foreign economic advisors, helping with economic transformation, also shared the neoliberal outlook. As a result, there is a tangible prejudice against “outside influence”, encompassing many critical reports of the European Commission, as well as the spectrum of foreign-funded NGOs.

Criticism of the Post-communist Order and “Political Capitalism”

Conservatives did not take aim solely at neoliberal transformers, but at the traditional Left as well, personified by the unions, levelling accusations of assisting “a sell-out of national treasures to foreign capital” in exchange for lucrative positions on supervisory boards, instead of tackling traditional social issues. So it was national-conservative Fidesz, while still in opposition, that called to arms against the reform of the pension system with private funds at its core, initiated by the socialist-liberal government. When Fidesz came to power in 2010, it rolled back the reforms and returned pensions under government control. The new economic policy started pushing for the creation of “national champions” that would be able to compete against big multinationals.

Poland has gone through a similar development after the election victory of Kaczyński’s PiS. The conservative discourse in the country had long been centered on criticism of its post-communist order and accompanying “political capitalism”. Only systemic changes brought about by the “Fourth Polish Republic”, with strong state institutions at its core, were cast as capable of fighting for national interests.

An important element was the institutional reform of the Polish justice system, presented by PiS as a breakaway from post-communist justice and its proponents. A parallel with Hungary after 2010 is obvious: one of the first things Orbán did after acquiring a constitutional majority was to push through a new constitution and weaken the Constitutional Court.

The furthest down the path towards “a conservative renaissance” is Russia these days, which is seen by the authors as playing the key role in spreading the new “illiberal conservatism”. Russia’s turn towards authoritative tendencies started much earlier than in Hungary or in Poland. It came about from two directions. First, it was the governing elite connected with the United Russia party, which after the victory in 2003 began to look for a new identity. The second direction is personified by ideologues and activists on the fringes of existing elites.

A System of a “Managed Democracy”

Russian conservatives worry about the country’s state of economy, and call for a strong state represented by a powerful leader. What plays into their hands is the fact that the Western liberal system of checks and balances, introduced in Yeltsin’s era, never really took hold, not to mention the accompanying chaos and confusion. Yeltsin’s successor Putin then established a system of “managed democracy” which could be characterized as a combination of nominal competition and plurality, yet with direct subordination to Kremlin.

The question remains whether this state of affairs is the endgame for the Hungarian Fidesz and the Polish PiS. There is some evidence in Orbán’s case that lends certain credibility to such a theory: his musings about supplanting liberal democracy with a system of Christian democracy, or about creating a long term “central power field in politics”, point in this direction.

The breadth and scope of this review, compiled by Bluhm and Varga, is what makes it so valuable. It seeks to bring to light the underlying issues, cultural and historical context, and also shows the limits of connecting conservative political currents in Central and Eastern Europe.

is the managing editor of Aspen Review Central Europe. He was the editor-in-chief of Mezinárodní politika monthly from 2005 to 2015, and a correspondent for the Austrian daily Der Standard in the Czech Republic from 2000 to 2012. He has been a foreign correspondent of Lidové noviny daily since 2015, where he covers news reports from German-speaking countries. He is a regular guest in commentaries broadcast by Český rozhlas Plus.