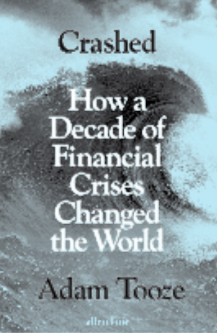 Crashed: How a Decade of Financial Crises Changed the World

Investment bankers have always made bad big picture predictions. “The stock market has forecast nine of the last five recessions,” the Nobel Prize-winning economist Paul Samuelson famously said back in the 1960s. Bankers haven’t done very well recently either. While all manner of experts did warn of a crisis in the run-up to the collapse of Lehman Brothers on 15 September 2008, the kind of crisis they predicted in no way resembled the one that occurred.

In the fall of 2007, The Economist warned of a “Dollar Panic” and Der Spiegel was prognosticating “a Pearl Harbor without the war”. A Chinese sell-off of U.S. Treasury Bonds, the experts said, risked triggering a sovereign debt disaster in the United States that would ripple through the global economy. While everyone was preoccupied talking about strained American public finances, securitized toxic mortgages spread throughout the Western banking system. The fallout led to a ticking time bomb, which U.S. Federal Reserve Chairman Ben Bernanke called “the worst financial crisis in global history”.

Not only were most investors wrong in 2007, but a full decade after Lehman’s collapse that mass sell-off of U.S bonds has still yet to occur. In fact, it has been the exact opposite. In the volatile post-2008 economic environment, skittish investors have instead sought out U.S. Treasury Bonds as a low-risk investment — strengthening, not weakening, the American role in global finance. As Adam Tooze notes in his brilliant new history “Crashed: How a Decade of Financial Crisis Changed the World,” quite a lot of the popular narrative of what led to and followed the crisis is just plain wrong. Without a firm grasp on what happened, or willingness to acknowledge who is at fault, how can we fix it?

So why is Europe’s central role so often ignored? The narrative of reckless American finance dovetailed nicely with that of the reckless foreign policy implemented by George W. Bush.

Conventional wisdom has it that the financial crisis was rooted in irresponsible lending and cowboy capitalism in the United States. Certainly, it was. However, as Tooze argues, Europe played a much greater role in aiding and abetting these conditions than is generally recognized. The transatlantic — not just the American — financial community deserves to shoulder the blame, he contends.

Actually, many of Europe’s banks behaved even worse than their American brethren. In 2007, the three largest banks in the world by assets (Royal Bank of Scotland, Deutsche Bank and BNP Paribas) were all European. Worse yet, on average, European banks were under-capitalized as compared to their American counterparts because they were able to operate in the United States with lower capital requirements. By the end of 2007, European banks had a $1.1 to $1.3 billion shortfall between dollar assets and liabilities. Later, when the U.S. Federal Reserve began buying up mortgage-backed securities as part of its quantitative easing policy, the top two sellers were European (Deutsche Bank and Credit Suisse), so were numbers eight, nine and ten (Barclays, UBS and BNP Paribas). For all mathematicians, that is half of the top ten, casting the proverbial “too big to fail” phrase applied to American banks in a new light.

So why is Europe’s central role so often ignored? The narrative of reckless American finance dovetailed nicely with that of the reckless foreign policy implemented by George W. Bush, Tooze says. Much of the European mainstream was appalled by the United States’ — admittedly appalling — unilateral 2003 invasion of Iraq, with Germany, France and others abstaining altogether. However, that same abstinence did carry over when it came to ignoring risky, often fraudulent, private sector investment strategies. “The idea that ‘social Europe’ had deviated in any essential way from the logic of turbocharged ‘financial capitalism’ as exemplified by America was an illusion,” Tooze writes. “In fact, Europe’s financial capitalism was even more spectacularly overgrown and it owed a large part of its growth to deep entanglement in the American boom.”

The United States and the U.K. recovered more quickly

Amid American adventurism in the Middle East, there was talk of a “bifurcation within modernity, between the chastened post-imperial world of Europe and the expansive, imperially aggressive Anglosphere,” Tooze writes. But this simply wasn’t true, and the myth spurred very different approaches to the crisis on each side of the Atlantic.

While American failures became a major part of public discourse — though not necessarily a target of serious reform — the European public has, for the most part, allowed banks and the private sector to escape blame. Post-crisis, Europe more quickly transitioned back to the ideologically driven 2007 discourses that focused on sovereign debt crises and state-spending as the predominant threats to the economy.

With a European public conditioned to think of America as negligent and arrogant, and the deranged Trump presidency only cementing that impression, Europe’s banking community still has no desire to advertise their complicity in the crisis. In Europe, Greeks not bankers are the bad guys.

Talk of fiscal discipline, competitiveness, flexible labor markets, which Tooze calls “shibboleths of the watered-down, supply-side economics inherited from the days of Reagan and Thatcher,” has overwhelmed honesty about crisis causes and solutions. As the United States and the U.K. pumped liquidity into the banking system, and recovered more quickly, European banks — hoping to profit from slightly higher yields with supposed low risk — used European Central Bank (ECB) credit to buy up sovereign debt in places like Portugal and Greece. This meant banks that were already reeling from horrible real estate investments opted to absorb risky public debt as well. In this way, and others, Europe’s imprecise and ineffective response to the 2008 crisis pointed the way directly to the 2010 eurozone crisis.

A gigantic surge in debt in the private sector

“It may fly in the face of conservative assumptions about ‘democratic deficits’ and the spendthrift habits of irresponsible politicians, but the formation of the eurozone without an ironclad fiscal constitution did not lead to a festival of unrestrained sovereign borrowing,” Tooze writes. “The backdrop to the eurozone crisis was, indeed, a gigantic surge in debt, but it was in the private, not the public, sector.”

While Tooze’s book is global in scope — with ample attention and separate chapters dedicated to the United States, China, Russia and the rest of the G-20 — his step-by-step decimation of the crisis narrative still perpetuated by Europe’s elite, about profligate Greeks or corrupt Italians and the need for sober discipline, is the most essential part of this wide-ranging text. Angela Merkel, Germany and the European Union’s feckless institutions (often operating under misguided German influence) come off looking rather sinister.

Amid real estate bubbles in places as diverse as Spain, Ireland, Greece, Sweden, Belgium, Denmark and France, Europe’s central bank kept interest rates low. “In effect, by setting low rates, the ECB prioritized the need to stimulate the German economy over restraining the boom in the periphery,” Tooze writes. In 2009, when spending and stimulus was the norm in the United States, China and elsewhere, Merkel’s grand coalition passed a constitutional amendment mandating balanced budgets in Germany.

Post-crisis, Europe more quickly transitioned back to the ideologically driven 2007 discourses that focused on sovereign debt crises and state-spending as the predominant threats to the economy.

Not only did this policy curb German consumption, thus hindering growth elsewhere in the continent, but less German borrowing also forced investors, looking to buy government bonds, to go elsewhere. The resulting competition drove down yields on riskier southern Europe bonds, stimulating more borrowing by those governments. Big banks bought up debt and then, when faced with the prospect of losing their investment, used political influence in Brussels and Berlin to jump the cue in collecting during the eurozone crisis.

Merkel vetoed a plan of a common European bailout fund

Even before that, in October 2008, then French Finance Minister Christine Lagarde began worrying that a crisis in some small eurozone country might pose a systemic threat to European finances at large. At the time, for example, Ireland’s banks carried balance sheets that were equivalent to 700% of the country’s GDP. In an interview in the German business newspaper Handelsblatt, Lagarde floated the idea of a common European bailout fund, but she did not get far. Just a few days later, Merkel vetoed a plan to develop a common European response to the banking crisis. According to then French President Nicolas Sarkozy, Merkel said: “Chacun su merde!” (To each his own shit!).

In 2009, when spending and stimulus was the norm in the United States, China and elsewhere, Merkel’s grand coalition passed a constitutional amendment mandating balanced budgets in Germany.

We know what came next. “The eurozone, through willful policy choices, drove tens of millions of its citizens into the depths of a 1930s style depression,” Tooze writes. “It was one of the worst self-inflicted economic disasters on record.”

The policies in the eurozone periphery were equally amateurish and discriminatory. Amid a global liquidity crisis, the ECB established so-called “swap lines” with central banks in Denmark and Sweden (both countries outside the common currency). This made short term loans in euros available to help backstop the Danish and Swedish crowns, while breeding confidence in their respective banking systems. No such thing was forthcoming in Central Europe, where central banks in Poland and Hungary were forced to acquire euros on repo markets — just like stressed commercial banks. The results were predictable. In September 2008 the forint traded at 163.23 to the dollar, two years later that ratio was 222:1, cutting real salaries and savings by more than one-third. Meanwhile, the Polish zloty lost 35 percent of its value against the dollar over the same period. It’s no wonder those trends coincide with increased euroscepticism in Budapest and Warsaw.

Failures of leadership and failures of collective action

Tooze, an economic historian and professor at Columbia University in New York City, writes great, in-depth histories with a contrarian edge. His 2006 book “The Wages of Destruction” analyzed the economy of Nazi Germany and argued that Hitler had no choice but to invade the Soviet Union so as to obtain resources to fuel his war efforts in Western Europe. In 2014, “The Deluge” contends that it was during World War I (and not as generally argued, during World War II) that the United States became the world’s preeminent power — with economic might as the driving force.

In “Crashed”, Tooze presents a sweeping description of the systemic banking changes that spurred subprime lending in the American real estate market and, thus, the great crisis. He also meticulously traces the impact and response throughout the globe, piecing together a mosaic of data and anecdote in a clear chronology. “Crashed” is equally impressive in its global scope and readability, but is also essential reading for anybody thinking seriously about the future of the European Union. Nothing comes across so starkly as Europe’s incoherence and inability to constructively approach, never mind solve, problems.

The policies in the eurozone periphery were equally amateurish and discriminatory. Amid a global liquidity crisis, the ECB established so-called “swap lines” with central banks in Denmark and Sweden.

“The story told here is a train wreck, a shambles of conflicting visions, a dispiriting drama of missed opportunities, of failures of leadership and failures of collective action,” Tooze writes. “If there are groups that benefitted — a few bondholders who got paid, a bank that escaped painful restructuring — it was on a small scale, totally out of proportion to the enormous costs inflicted.”

The carnage, incompetence, dishonesty and arrogance is almost enough to turn a reader into a Orbán, Babiš or Kaczyński supporter. Almost.

writes for The Economist, The Los Angeles Review of Books, Le Monde Diplomatique and The American Interest. He is an opinion columnist for the Slovak daily Sme and a PhD candidate at the University of Barcelona.