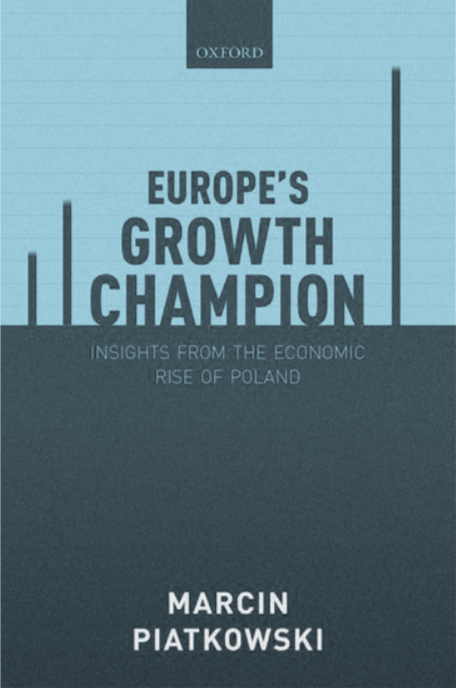 Marcin Piątkowski’s book may be disliked on both sides of the barricade of the main political dispute in Poland. It deprives the conservatives of the historical myth of the Old Republic, to which they would very much like to take us at the end of the second decade of the twenty-first century. However, this is not the only reason why you should read it.

Milan Kundera once created a figure that contained the essence of the mythological self-definition of the Polish (first dissident and then co-ruling) intellectuals of the 1980s and 1990s. It depicts our part of Europe kidnapped by a communist bull from the East, but stubbornly striving to fulfil its historical destiny and return to its supposedly natural place among the nations of the West. This is exactly how Polish post-Solidarity liberals described the three decades after the fall of communism in 1989. Poland and its neighbours were returning to Europe, our economies were becoming normal again, making up for a lost time in the black hole of communism, and our citizens were finally regaining their lost democracy.

Marcin Piątkowski’s book proposes a radical break with this beautiful vision. The author, an economist who for years has been a senior economist at the World Bank in Beijing, mercilessly overthrows all its pillars, demonstrating that in its long history Poland has never been part of the West— there was nowhere to go back to, as the economic model implemented with the reforms of the 1990s had not functioned in this area in pre-communist times—so there was no question of normality, and finally, during the first free elections on 4 June 1989, we did not regain democracy in Poland, because it simply did not exist here before. What is more, communism was not a black hole, but a key event in Polish history.

Noble privileges quickly paralyzed institutions and the state and the manor system instilled in Poland the conviction that our most important comparative advantage should be a cheap labor force.

Piątkowski is not at all intent, however, on denouncing three decades of building capitalism in Poland. Paraphrasing Hegel, one can say that instead he proposes to turn the story of this period from the “romantic head” to the “economic feet”, and to put everything in a proper historical context. And this last element is the strongest in his proposal.

The Polish Troubles Began in the Sixteenth Century

In fact, almost half of Europe’s Growth Champion is devoted to economic history. The author begins his story in the sixteenth century, when, in his opinion, the Polish troubles began. It was then, contrary to the vision of the Golden Age that has been fed to us, that the elite of the emerging Polish-Lithuanian Commonwealth chose the worst option. They based their political model on the privileges of the nobility, founded the economic model on the manor, using agricultural monoculture and serfdom, and thus bringing about the condition of a peripheral country.

Noble privileges quickly paralyzed institutions and the state (depriving them of the army and off tax revenues), and the manor system instilled in Poland the conviction that our most important comparative advantage should be a cheap labor force. This was repeated by successive generations of local elites, and 1989 instilled this discourse with a new life in a neoliberal form. Using hard data, Piątkowski pre-empts any arguments of conservative historians who have recently tried to relativize serfdom and promote a vision of the Sarmatian Republic of prosperity. The level of consumption, the literacy rate, the number and autonomy of cities, the legal order, the volume of tax revenues—all this put the Commonwealth far behind the West.

Indeed, there is something shocking in the analysis of indicators describing the ratio of GDP in Poland to GDP in Western Europe, which after reaching about 53% in the sixteenth century, systematically decreased until the beginning of the nineteenth century (to 38%), increased in the second half of the nineteenth century (56%), then fell again in the interwar period (45%) and grew after 1945 (until the 1970s). It turns out that the GDP level was catching up with the Western one only during the partitions and communism. Apparently, Poland’s independence was bad for the growth of the income of its inhabitants. But is it any wonder if for centuries independence meant the sovereign power of the nobility?

The Landed Gentry as a Serious Brake on Modernization

This World Bank economist does not genuflect before economic indicators. As a solid institutionalist, he is forced to acknowledge that Poland’s main problem was not too little investment, competitiveness or technology, but the social barriers behind all these deficits. The most serious impediment to modernization was the landed gentry—a class which, due to its disproportionate political power, economic particularism and xenophobic, anti-intellectual ideology, brought about the collapse of the country in the eighteenth century and again in the interwar period of the twentieth century.

Piątkowski proves that during the first two decades of its rule in the Polish lands, communism produced changes without which it would be difficult even to dream of a leap into modernity. At the same time, he quotes enough hard data to justify the claim that if communist Poland had ended in the late 1960s, we would have remembered it today with respect, recognition and tenderness. Even when the author compares communism to the fourteenth-century plague in Western Europe, he does it tongue in cheek, demonstrating how much good the brutal destruction of the old feudal world did.

It is equally interesting when the author of Europe’s Growth Champion begins to revise the history of Polish transition after 1989. It is a peculiar revision, however, because it looks like sincere hagiography. The whole process arouses the enthusiasm of Piątkowski, who goes as far as to say that the three decades after the Round Table were the best period in the history of Poland. Yet he does introduce some significant corrections to the hackneyed “success story of Polish reforms”. First of all, it turns out that there were two fathers of the success: Leszek Balcerowicz, who played the role of a bad policeman and Grzegorz Kołodko, the good policeman of transition. Balcerowicz brought about shock therapy with unemployment, pauperization, recession and the collapse of entire branches of the economy.

Poland’s main problem was not too little investment, competitiveness or technology, but the social barriers behind all these deficits.

Reformed Neoliberalism Saved Poland from a Drift toward Russian Solutions

The history of transition outlined in this way becomes more dramatic. But the attempt at presenting its balance sheet reveals many of the key limitations of the author’s approach. The emphasis on the role of institutions is connected with his failure to notice the dynamics of social processes and conflicts. This, in turn, results in the claim that external aggression or pressure is the only effective catalyst for changes allowing societies to move from oligarchy to democracy. Even if this is the case historically and statistically, no aggression or occupation would have been able to change anything without coinciding local conflicts and grassroots desire for change.

It was like this in Poland in 1944, it was like this, all the differences notwithstanding, after 1989, when the shock therapy bluntly imposed by the IMF and the creditors of Warsaw collided with democratic aspirations and strong social resistance, expressed in thousands of strikes in 1991-1993. It was only from this clash that the somewhat less brutal, slightly less dogmatic, reformed neoliberalism contained in Grzegorz Kołodko’s Strategy for Poland emerged, which saved Poland from a drift towards Russian (authoritarianism), Ukrainian (oligarchy) or Hungarian (destruction of the manufacturing sector of the economy) solutions.

Additionally, the scale of the Polish success after 1989 does not seem to be as great as Piątkowski suggests. His data illustrating the dynamic GDP growth (also per capita), the increase in the number of students, the increase in consumption and wages, the decrease in unemployment, the inflow of investments and the positive effect of emigration and EU transfers should be contrasted with the latest data on the inequality rate (one of the highest in Europe), the increase in poverty and the percentage of people living below the minimum subsistence level (still huge—almost 40%!), the ratio of working time and productivity growth to wages (very unfavorable for wages), the median of wages (low), as well as the awareness of how disastrously low the starting point was for Poland in 1989 and how catastrophic the recession which Poland came out of was in 1993 (which explains the 7% growth rate) to put a damper on the author’s optimism.

The Most Important Summary of Thirty Years of Capitalism

In fact, there are strong arguments undermining Piątkowski’s eponymous claim about Poland leaving the economic peripheries. After all, today we are a sub-supplier in the European division of labor, the majority of the (still strong) industry is concentrated in assembly plants of Western corporations, and, as a result, dynamic Polish exports are characterized by a high share of imports. It is certainly better to be the periphery of the European Union than the periphery of world capitalism, but it is still not a successful economy. As long as our competitive advantage remains a cheap (and unstable) labor, we will remain stuck in a modernized, but still largely insurmountable, the trajectory of peripheral development which Poland has been following for five centuries.

There were two fathers of the success: Leszek Balcerowicz, who played the role of a bad policeman and Grzegorz Kołodko, the good policeman of transition.

Incidentally, Piątkowski seems to be aware of the weakness of the economic model that has made Poland the European leader in growth. He knows that even if it functioned well in the 1990s (which in itself is a highly controversial claim), it no longer guarantees success. This is why he proposes a fundamental correction, which he calls the Warsaw Consensus. As a combination of continuation and as an alternative to neoliberal Washington Consensus, it includes actions worthy not only of the World Bank’s leadership, “wiser after the crisis,” but also of a decent social democracy (e.g. strengthening institutions, increasing the employment rate, opening up to immigration, inclusive growth, a focus on well-being).

Europe’s Growth Champion is one of the most important economic books of the year, and certainly the most important Polish summary of the thirty years of capitalism in our region. And this even if only because it provides excellent material for a serious discussion, which is so sorely lacking. After such a pronouncement, in an ideal world, Marcin Piątkowski would probably become the chief economist of Polish liberals (both conservative and progressive), and his Warsaw Consensus would be the basis for the economic program of the Civic Platform (which today does not have one). In the real world, it remains to be hoped that his claims and proposals will boost the anemic discussion around the thirtieth anniversary of the political transition, as well as the Polish and Central European struggles with development and a peripheral status.

is editor-in-chief of “The Library of Le Monde Diplomatique—Polish edition” book series. Author, co-author and editor of several books, recently issued “TTIP–a Transatlantic Trap” (2015) and “The Dictatorship of Debt” (2016). Co-curator of the exhibition “Refugees. Present — Absent” presented in gallery księgarnia/wystawa in Krakow, he cooperates with the Polish Theatre (Teatr Polski) in Bydgoszcz.