We live in times when democracies have to prove they can still meet the needs of their citizens or be defeated by authoritarianism. The major question is how to make democracy deliver security and stability to its citizens without compromising its core values. Łukasz Pawłowski reflects on issues discussed during Aspen’s Seminar for Young European Leaders.

“For we must consider that we shall be as a city upon a hill. The eyes of all people are upon us”. These famous words – delivered by John Winthrop in 1630, before the first group of Massachusetts Bay colonists embarked on their ship to what was then still a new world – have often been used to rally Americans around certain goals, ideas or political leaders.

Over decades, this biblical image has also been both ridiculed and embraced by people around the world. Only 30 years ago many believed that after the spectacular collapse of Communism in its Soviet form, no other political system would be able to challenge the western liberal democracy the United States came to embody. And although talks of “the unipolar moment”, “the end of history”, or even “the third wave of democracy” were soon challenged, for a moment the arch of history did seem to be bending towards justice. The Iron Curtain was gone, and democracy spread to Central and parts of Eastern Europe. NATO and EU enlargement promised stability and development to people in former USSR satellite countries. Hundreds of millions of people were lifted from poverty, especially in China which at the time raised more hopes for a democratic change than fears of authoritarian revanchism. The Internet was still seen as a tool for empowering people and changing the world into a global public square, rather than a source of disinformation, bullying and social divisions.

The Age of Surveillance Capitalism

Given the benefit of hindsight, we tend to think that in the past political and moral choices were simpler to make, and the way forward clearer than it is now. This is an illusion, at least to some extent. Yet the challenges we currently face indeed seem greater than only two, three decades ago.

Climate crisis is the first that comes to mind. Obviously, the process of exploiting our planet to the verge of destruction did not start yesterday, but only in recent years the threat has become apparent and largely indisputable. Record high temperatures from Greenland, through Canada to Siberia, massive wildfires ravaging California and Australia, winter storms paralyzing electric grids, and torrential rainfalls threatening whole communities have become parts of our daily newsfeeds. And although, more and more of us agree that ‘something’ has to be done, although world leaders publicly pledge action—we still fall short of the goal we need to achieve.

What’s equally important, however, is that we still face questions on how to prevent a major catastrophe without hurting those most vulnerable, without increasing global and national inequalities, without penalizing countries least responsible for the current predicament and without compromising our liberties in the process.

After massive ‘yellow vests’ protests in France in 2018 we learned that reforms towards more sustainable economies must take into account not only future benefits but also present costs and their unequal social impact. While rich countries of the West have the necessary resources (or the borrowing power) to invest in green technologies and provide a financial cushion to more vulnerable citizens, the question arises as to what to do with states unable to come up with sufficient funds. EU members are openly discussing the so-called Carbon Border Adjustment Mechanism—a tariff levied on products from places with less restrictive environmental regulations. It is supposed to protect EU economies from foreign competition and incentivize countries outside the bloc to emulate European regulations. Without financial support, however, it may cut these countries off from the European market altogether, plunging them into even greater poverty and provoking a new set of challenges including future waves of mass migration. How can, however, this dilemma of intra-European versus more global solidarity be squared?

Another great challenge facing our generation is the growing power of big tech companies. Hundreds of documents, revealed by Facebook whistleblower Frances Haugen, are yet additional proof of corporate malpractices, which include engaging in censorship in authoritarian states, applying double standards of conduct to more ‘valuable’ users, or ignoring the company’s own data on how its products may cause damage to individuals and societies.

The scale and power of these corporations have reached levels at which they cease to be regular market players. “Amazon, Apple, Facebook, Google, and Twitter are no longer merely large companies; they have taken control of aspects of society, the economy, and national security that were long the exclusive preserve of the state”, Ian Bremmer wrote in “Foreign Affairs”.¹ Adrienne La France, executive editor at “The Atlantic”, argued that Facebook with its 3 billion users is “the largest autocracy on earth” and should be treated by the government in Washington not as an American company but rather as “a hostile foreign power”.²

Today in The Atlantic: Facebook is the largest autocracy on Earth, @AdrienneLaF writes. Plus: @olgakhazan on a support group for the unwoke, and @KatherineJWu on the troubling loophole in Joe Biden’s new vaccine mandate. Read it all here: https://t.co/aMVh6HcwaH pic.twitter.com/GIHk0NBOTN

We have seen time and again how social media can be used to sow political discord, spread disinformation, stifle democratic opposition in autocratic regimes, and undermine trust in public institutions in democracies. Donald Trump’s campaign to falsify the results of the presidential elections – which led to an attack on the Capitol – was just the most tangible example of this phenomenon.

This is not to say that ‘traditional media’ should be absolved from any blame for the increasing social polarization and decreasing trust in our democratic political systems. The sheer size of tech companies and the communication tools they provide, however, allows them to exert much bigger influence—not only in politics but the economy as well.

In her bestselling book, Shoshana Zuboff declares we have entered “The Age of Surveillance Capitalism”. In this new economy, tech companies – like Facebook and Google – provide their users with allegedly free services, which serve to extract personal information later sold to other companies, allowing them to better target customers with services and products. Data is now being harvested from us constantly, not only by Internet tools but by the everyday products surrounding us. Even seemingly benign gadgets – like watches, cars, vacuum cleaners, toothbrushes, or fridges – have become ‘smart’ and thus able to acquire immense quantities of information on everything from our morning rituals, through food preferences, hobbies, health problems and driving styles, to political opinions.

Many of us already know this, and demand tighter regulations to curtail corporate abuse of the collected data. Far more problematic, however, is the question of using the same tools for the so-called ‘greater good’.

Should we allow a ‘smart’ fridge to encourage its user to eat more healthily? Should a ‘smart’ car be allowed to report its user’s occasional violation of speed limits directly to the police and insurance company? Should a buying app prevent us from purchasing, let’s say, clothes produced in a legal but environmentally unsustainable way? All this may change the world for the better, but by agreeing to the above solutions, are we not giving away even more power to companies of which we are already terrified?

A former colleague of mine has written recently that these days “everything has become moral” and that the number of issues on which we may enjoy the luxury of not having an opinion has shrunk dramatically. For example, due to growing concerns about climate change, questions of what we eat, what we wear, whether we shower or take a bath, or even how many children we have are now a matter of public judgment. And thanks to the outreach provided by social media, a person caught driving a big car, eating meat, wearing jeans, and enjoying the company of their large family may now not only be publicly judged but publicly shamed as well.

Should we agree on such expansion of social control, or should we defend an individual’s right to privacy for the sake of preserving liberal democracy, even if it means that our environmental goals may become more difficult to achieve?

Self-doubt in the West

These are times of insecurity and self-doubt in the West, which push some of our fellow citizens to look more favourably on either populists claiming to represent common people against ‘the elites’, or downright authoritarians promising simple solutions to complicated problems.

President Joe Biden has stated repeatedly that we are living in times when democracies have to prove they can still meet the needs of their citizens or be defeated by authoritarianism. Even if one dismisses Biden’s rhetoric, there is no doubt we could do more to reinstate trust in the government of the people, by the people and for the people. In her recent contribution to “Foreign Affairs”, Madeleine Albright – honorary co-chair of the U.S. Aspen board – called for the Biden administration to invest heavily in democracy promotion and envisioned “the coming democratic revival”. One could hardly disagree, and not admire Mrs. Albright’s optimism.

The major question, however, is how to make democracy compatible with the key challenges our communities face. In other words, how to make it deliver security and stability to its citizens without compromising its core values.

Initiatives like the Aspen Seminar for Young European Leaders – where people from all over the continent spend hours in discussions based on eye-opening and provocative texts – provide cognitive tools to better understand the complexity of what the future might bring. A group of 20-25 people, with diverse professional and personal backgrounds, also allows participants to transcend the mental cliches we tend to apply when thinking about issues such as immigration, gender equality, war and peace, divisions within Europe, etc. A theater director may see the same problem from an entirely different perspective than a political scientist, young MP or a start-up owner. And no matter your personal opinion on European refugee policy, hearing the story of a person who experienced war, was lucky enough to escape a war-torn country, or even works with the people coming from war zones helps you better understand the tragedy of their position. All these people participated in the last seminar held in September 2021.

Many of the above questions and examples of the challenges facing our democracies come straight from the discussions we had during that seminar. If the United States, or more broadly the West, is to make another bid to become “a city upon a hill”, if it is indeed time, as Mrs. Albright asserts, for “democratic forces to regain the initiative”, then it would be wise to invest in preparing such forces. 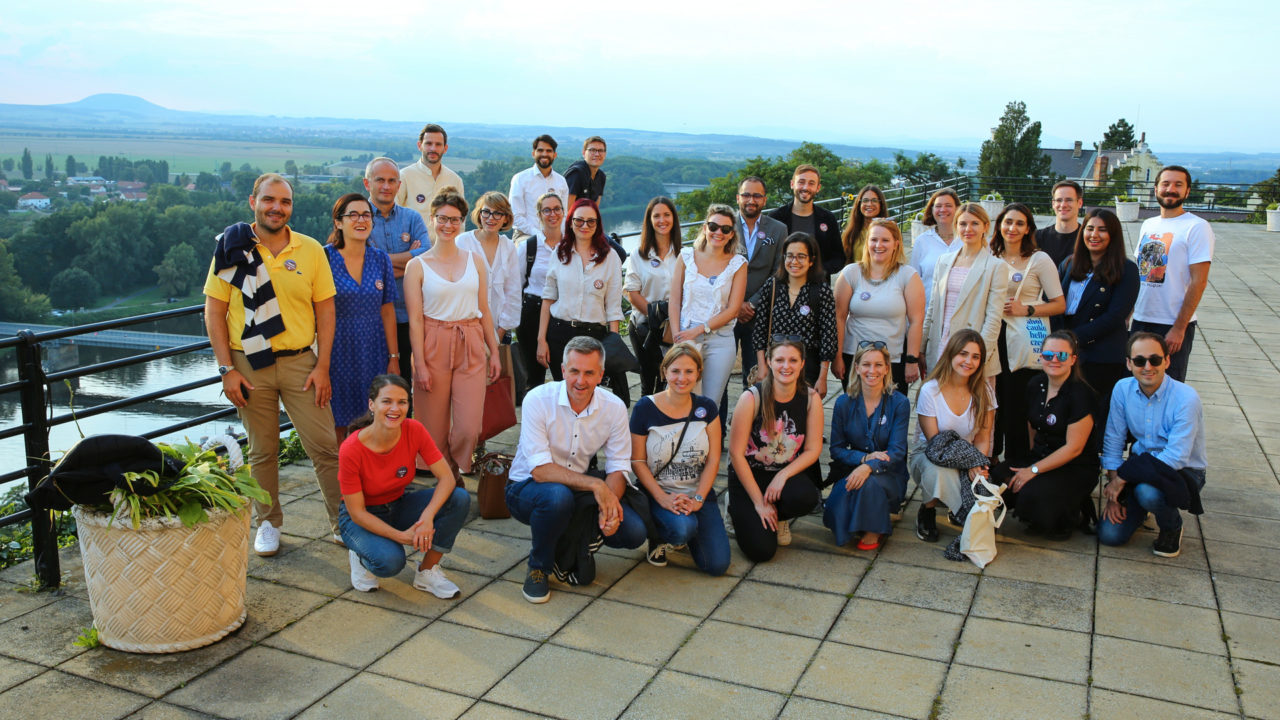 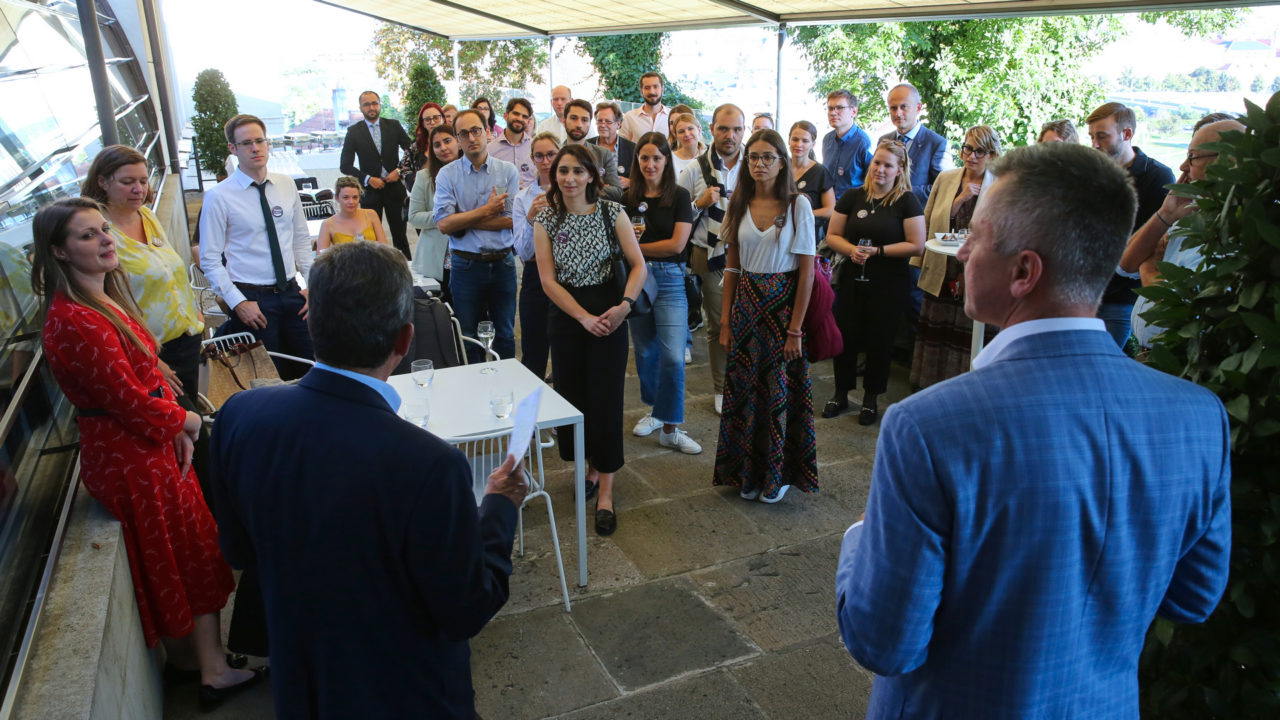 is a political commentator and advisor specializing in Polish and American politics. A psychologist and sociologist by education, he holds a PhD in social sciences from the University of Warsaw and was an academic visitor at Indiana University, Bloomington, and the University of Oxford. His articles have appeared in, among others, “Financial Times”, “Polityka” and “Gazeta Wyborcza”. He is a co-host of “Podkast amerykański” – a weekly podcast on American politics and society.